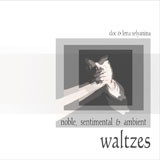 Friends of dark meditative ambient are in for another treat with this new co-creation from the Finnish ambient producer Doc and the Russian pianist Lena Selyanina. This album was inspired by Maurice Ravel's waltzes for the piano, and Lena's soulful and introspective piano takes quite naturally a prominent role on this material. As on their earlier releases (MT002 & MT004), the fundamental soundworld and atmosphere is that of deep, beatless, meditative ambient. From this calm and dark background emerge the cinematic soundscapes and Lena's stylish piano sections - at times touching and intimate, at times playful and theatrical, at times serious and immersed in darker reflections.

There's a certain cinematic and dramatic feel already in the music itself, and this sense of drama is accented by subtle lines, sighs and sounds originating from noble and ambient movies by Wim Wenders, Ingmar Bergman, Krzysztof Kieslowski and Andrei Tarkovsky.

NOTE: a special audiophile version (24 bit/44.1 kHz masters packed with FLAC, 664 MB download) of this album is available on BitTorrent.

Reviewer: metaperl - favoritefavoritefavorite - May 1, 2006
Subject: listen to all tracks before judging
I was just about to write this off but my player kept playing and lo and behold: track 5 is pretty damned cool. Not far from a soundtrack for a sleepwalking horror movie at times. But not dark ambient either. A soundscape so to speak. Think a more concrete Harold Budd.

The title of this release ÃÂNoble, Sentimental & Ambient Waltzes ÃÂ is the best prÃÂ©cis of its sounds: Noble - gracious ; Sentimental - emotional ; and Ambient - encompassing. The layers of gracious piano playing, sentimental orchestral movements, floating voices - moans, and teasing contrasts of light and dark sounds encompass the listener. Each track is a mischievous blend of both melodious, happy moments and dissonant, dark episodes. The track titles themselves are evocative of the overall atmosphere of this release. Suggested listening - at a minimum give track #2 [ÃÂThat fine line from your ear to your chin (is not so obvious anymore)ÃÂ] a listen as truly captures the essence of what youÃÂll find here - youÃÂll then be hooked with no chance of escape.